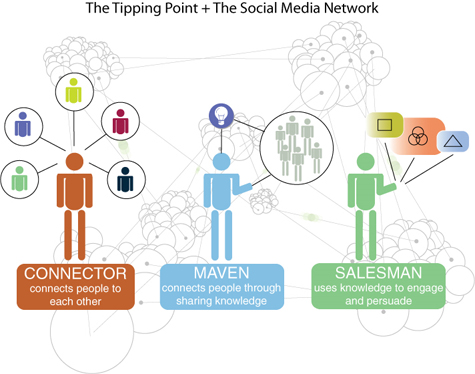 It’s always been apparent to me that we are all equally  unique and have a certain aura about us. While reading this next chapter, Gladwell touched on a concept of “Connectors, Mavens, & Salesmen.” It made it possible to see the overall importance of these individuals and how they play a part in these “tipping” points (epidemics). I found it very entertaining to learn of his views on the communication and transferring information by “word of mouth,” and how it was and will always by an important means of communication.

When Paul Revere  set out on his mission armed with the historical message of  “the British are coming.” He road horseback for 13 miles, from Charleston to Menotomy. He used his voice and told his listener’s to use theirs. Within a matter of hours the British had begun their (what they had thought to be an) “undetected” invasion, they than came face to face with the Colonial Militia, and ultimately lost the fight. Gladwell explained that Revere was acting out as a Connector, he brought the people together, and his unique drive to “connect” and pass along the urgent message allowed the information to branch and torrent throughout the region as quickly as it did. 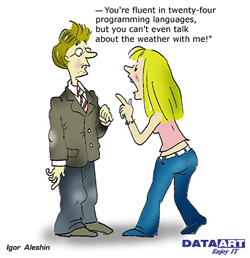 The comic that you see to your left is depicting a Maven confronting a Connector. Maven’s have the ability to interpret the qualities of people, place’s, or things in a different manor than the way most of us do. For example: You would say, “This coffee is too weak.” The Maven on the other hand might say “The coffee is a little delicate.” They have a knack for being pretty much neutral with all things. I think it be awesome if more people were this way.

Who do you listen to and ask for advice? If you know someone that knows what is seemingly everything about anything you might want to know about, and they are always somehow persuading you to take on a new hobbie, a purchase, maybe even a new favorite place to hangout. These individuals would be what Gladwell refers to as the “Salesman.” He points out that we still, in this day and age really do rely on our connection to people. The persuasion people have through  “wom” (word of mouth), despite all of these ingenious technologically advanced methods of advertising they’re usually overpowered by “wom,” because human beings like to believe that what they are being told is truth, really is in fact that, the truth. It’s easier to believe when the facts are being conveyed in a more “human” like fashion, like say a conversation between a friend. You’ll more than likely accept your friends opinion of a restaurant, over any commercial no matter how enticing it may be.